I have a lovely little dog called Daisy back at home. She is a wire haired fox terrier and is the sweetest little dog, she will sit around at your feet but she needs a friend. I have now moved out, and with my sister away at University it was decided that Daisy should have a little play mate, a new puppy. 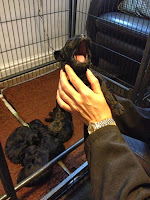 We decided to go with another terrier as it was the same breed as Daisy, but a different type because we didn't want two of the same dog. We got a call that there was a litter of the breed that we wanted and at the weekend we went to visit them and the mum. I remember the first time we saw Daisy and she was so tiny, I couldn't wait to see this new litter.

The litter was all the way in Ipswich which is very very far from my hometown, and about 3 hours from London which is were my Dad picked me up from. We EVENTUALLY got there, and were greeted straight away by Freya, the mum of the pups, a lovely looking dog with the most beautiful eyes looking up at us. Another thing I noticed was how fluffy she was! 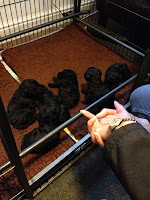 After a lot of playing with Freya, it was time to see the pups. They were so cute! They were absolutely tiny as they were only 4 weeks old were about the same size as your hand. Look at your hand right now, they could fit in that. The puppies were jet black and were falling all over each other, trying to scramble around. We were not able to pick a specific puppy, but the rest had all been sold already and we were guaranteed one. We decided to go with a girl, as we already have one. We are not allowed to pick the puppy up till 8 weeks, so when we see it next time, it should be a lot different. 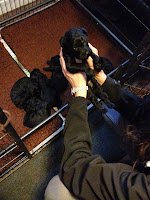 The next big debate we had was the name. This process is MUCH harder than it seems and we are still undecided on a name. As our current dog is called Daisy, we didn't want one too similar to that, and a lot of the nice dogs names we were picking out ended in an 'e' sound. It got to the stage where one of us always hated the name. We firstly decided on boo, then seeing the dog it was changed to Ivy or Willow. I thought it was stuck on Ivy till I got a phone call saying I now had a choice between 5 name which has Irish connections because of my family's heritage and the dog's heritage.

On Sunday I got a phone call from my Mum and Dad saying they had chosen 5 names, and me and my sister needed to rank them on a scoring system as they had and from favourite scoring 5 points and least scoring 1. At this point, I thought this was getting to extreme and turning into a game show. But it was funny how it has come to this and I rang my sister to explain what she had to do. How can a dog's name cause so much fuss! 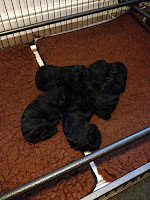 Now, I was still in favour of Ivy, but out of these my favourites were Erin & Orla. We thought this scoring system would actually solve the issue, but in fact it ended up as a tie. It was between Erin & Orla, so now we are back in the same position and stuck between names.


So I put it to you! PLEASE HELP US choose a name for our puppy. Do you have a favourite of our shortened down list? Or any favourites yourself? We would preferably like an Irish name and one that can be called easily for the puppy to recognise her name, matching it with a distinctive sound.

We won't pick the puppies up till 8 weeks old, and I won't actually be home till around christmas time to be with the puppy, but will keep you updated on the name situation and will take lots and lots of photos of her for you.

Below I am also going to share a video with you of the puppies at 4 weeks. So much cuteness!