My Favourite Advert Of 2013

As some of you may know I work in Advertising and did my degree in Advertising, so it's safe to say I always keep an eye out for good adverts, and 2013 was a fantastic year for adverts.

A lot of you seemed to like my 'Favourite Advert Of All Time' post, in fact it's the most viewed post of my entire blog. So I hope you enjoy my favourite of 2013!

This was a HARD choice, but I chose the one that I probably watched the most, shared with the most people and which really captured my heart.


What It's About
This advert is for the Mexican restaurant 'Chipotle' and primarily promoting their restaurant and new app 'The Scarecrow.' The advert promotes a healthier lifestyle and how Chipotle only use natural ingredients/sources for their food. It follows the story of a Scarecrow working for 'Crow Foods' who source their ingredients unfairly whilst hiding the truth & he wants to make a change.

Style
The style of the advert is quite unique. It is almost a short animated film which follows a journey and you are entranced right until the very end. It's funny how you can feel emotions for animated characters. The one part that gets me every time is that poor cow, the look in his eyes is heartbreaking. 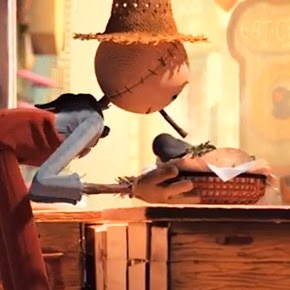 Firstly I think the music is incredible. The Fiona Apple Cover of 'Pure Imagination' is haunting & fits with this PERFECTLY. It's so creepy and emotive & even has the little up beat part of the song where the healthy food starts to kick in.

Another thing I like is the message. I myself am vegetarian, for no other reasons apart from the fact I don't like the taste of meat.. but even so.. it puts the restaurant in a good light. They do things differently which I like.

I like the fact it's animated, it's not so much a shouty message as it would be with real life animals, people & factories.  It's such a powerful message they are trying to portray; that we don't know what is going on behind closed doors, and it is done so cleverly. It in no way seems like it is shoving a message down your throat or preaching something. It is done with style that really makes you think.


I shared this advert AS SOON as I saw it and everyone loved it just as much.

Chipotle was honoured to see I chose them as you can see below:

So were the animation studio who made the advert:

So that's my favourite advert of 2013. What do you think?