Well to say that last week was busy is an understatement. In 4 days I spent over 17 hours in the car, 6 hours on a train, graduated, got a new puppy and went to see my sister for her birthday. Each day I spent in a different part of the country, Cheltenham, Southampton, Ipswich, Reading and London and by the end of it I was exhausted. However, it was so so worth it.

If you follow me on Twitter or Via this blog, you will know that on Thursday I Graduated University. This was a very proud day for me and I will shortly be doing a post on this with photos from the day. You may also know back at home my family were getting a new puppy and as I went home for my Graduation I was able to pick up the puppy with them. 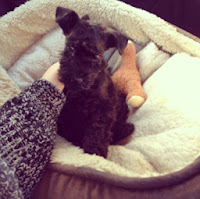 We left to get Pepper (the name we finally decided on) at 6am as she was a very very long car journey away from my hometown. We actually got there so early to have first pick of the puppies as they were all going that day. However when we got there, having to choose was the most heartbreaking thing! They were all adorable and I wish we could have taken all of them home! We eventually settled on Pepper as she wasn't the boldest out of the pups but also wasn't the most shy, so we believed she was a good mix. 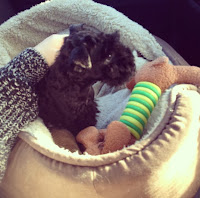 When we had seen the pups previously, they were only 4 weeks and barely moving, so at 8 weeks it was lovely to see them jumping around. During the car journey home, Pepper stayed in the back with me and was sick a few times, which is expected and similar to when we bought my other dog Daisy home for the first time. However, this time Pepper was sick over me, which was delightful. She was still very excited so didn't sleep very much. For the journey being as long as it was, she was very well behaved!


As we have another dog, Daisy, we hoped they would get on and take to each other, and they did which we were very happy with! Daisy is so lovely with Pepper, they are already playing together and we find them curled up together in the morning. Aww! 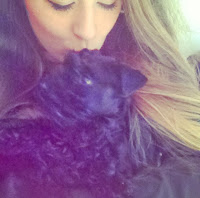 After the first day, Pepper became a lot more playful and her cheeky side is coming out. We have got her a LOT of toys and chew toys as she is already starting to nip a bit. She seems to love my slipper boots and the tassels! Unfortunately I do not live at home anymore, so I will not always see Pepper, but I am going home for Christmas so will make the most time I have with her and Daisy.


Pepper is a Kerry Blue Terrier and they are known to grow very fast, so I'm sure she won't stay as little as she is for long! Do any of you have one? She is so perfect, so fluffy and so cute! She has the most beautiful eyes and is so dainty following you around everywhere. As she is jet black you can almost miss her on a black floor! She has learnt to sit and I even saw her watching TV the other day! I managed to catch a video of this the other day and put in some other clips too. See below for the video.


I have SO many video's of Pepper, but the two I will show you below are her of her in the car on the way and and when she was sat watching TV and then starts to play. She was obsessed with my graduation balloons! Enjoy!


Overall, we are VERY pleased with Pepper. She is so cute and anyone that see's her instantly falls in love with her! I will keep you updated on her progression.

Do any of you have a Kerry Blue Terrier? What do you think of Pepper?